I was lucky yesterday when I went to the grocery store – they were actually roasting the yummy chiles outside.  I go for the mild version, and one sample of roasted chiles with cream cheese in a tortilla, and I was hooked.

Stay tuned the next couple of days as I share some delicious creations.  And, if your store doesn’t sell them roasted, it’s super easy to do it  in the oven, stove or on the grill.

We love seafood, especially shrimp, crab, lobster 🙂 so when the hub brought me a souvenir t-shirt from Maryland, with Old Bay smattered across the front, I thought “very fitting”.  He also bought a can of Old Bay seasoning.  I’ve seen recipes where Old Bay @OLDBAYseasoning was used, but I’ve never bought any.  AND, we have an annual fall shrimp boil, but use Zatarain’s (I always smell it for some stupid reason, and sneeze for 10 minutes after.  You would think I would learn.  DUH)

Anyway, we decided to try steamed spiced shrimp tonight with a ribeye steak.  YUM.  Anyway, I was a little confused, and even confirmed it on their site, that to “steam” the shrimp, you actually place it in a boiling mixture, add a lid, and in few minutes, you’re ready to roll.  OOPS…just had to take a break.  We are huge K-State fans and Tyler Lockett, former KSU player, just returned a punt for touchdown for the Seahawks!!!  Purple Pride!!

Anyway, I was wary because it sounded as though it would be boiled shrimp.  NOPE.  The most amazing stuff E.V.E.R.  You’ll notice that the official recipe on the back of the can says use either vinegar or beer.  Well, everything’s better with beer, correct?   Leave the shell on the shrimp (buy the cleaned ones) and it took maybe 2 minutes, if that long, to finish them off.  You want them pink, but be really careful as overdone shrimp are TOUGH.  Ruined.  The shrimp actually open up and you can easily tell when they’re done.

I saw a recipe on their site for sweet and spicy salmon on the grill, so that’s my next venture.  So, try this out, and this year, we’ll be adding Old Bay to our shrimp boil mixture.  I’ll share that later this fall.  Enjoy, and thank so much for hanging out!

At medium heat, bring to a boil 1/2 cup beer, 1/2 cup water and 2 TBSP Old Bay Seasoning.  Carefully stir in 1 lb. cleaned shell-on shrimp.  Cover and steam, keeping your eye on them.  A couple of minutes and you’re typically good to go.

Now that the kids are back in school and everyone is running around the house all crazy-like, I wanted to share a scrumptious muffin recipe that can be made ahead and frozen, microwaved, has protein, and is customizable (is that a word?) for even the most finicky eater.  My friend Heather and her daughter Gabby whipped these up, and I think they’re gone already.

The supplies, and the finished product:

After spraying your muffin cups, throw in whatever ingredients you wish — ham, bacon, spinach, onion, green pepper, sausage….you get the deal!  Oh yeah, and don’t forget the CHEESE!!!  Season with salt, pepper, and garlic powder if desired, then add your beaten eggs.  They freeze well and are ready in a snap with the handy dandy microwave!  Enjoy!

Assemble chopped veggies and meats, and your choice of grated cheese(s), and sprinkle in muffin tins. Beat desired amount of eggs and add to muffin tins.  Bake approximately 15 minutes or until centers are set.  Cool on wire rack.  Refrigerate or freeze for use later.  Microwaves well.

Found these cool little magnetic spice containers at a market that sells items from around the world 🙂  Asked my wondrous husband to get a piece of flat iron, and voila, I have a spice rack!  Very little $$$ involved and looks pretty darn cool.  I bought some chalkboard stickers at a craft store, so I’ll be labeling them soon.

it’s a pretty sweet little deal and will be even better with labels!

Pineapple Poke Bundt Cake.  Catchy name, huh?  I actually stumbled across this recipe in the Sunday coupon ads (of course I didn’t use the coupon) but the cake is delicious.  I thought I would share because it’s easy. quick, moist and delicious!

I snapped a quick pic before it was attacked!  Enjoy as we are and thanks, Dole, for the recipe!

Remove cake from oven and set on wire rack.  Poke holes at 1/2 inch intervals with a skewer while still hot and in pan.  Pour mixture over cake slowly with a spoon.  You may need to poke additional holes.  Advice:  just go crazy with the skewer the first time.    Allow to cool in pan 30-40 minutes, then flip upside down on serving platter.  Cool completely then drizzle with glaze.

You’ll notice that in my Recipe Box, I’ve added a new category called “Cooking with Kids”.  Why, you might ask?  Well two of my favorite cooks were at it again last night, and we happily sampled their creation!  Here’s the final product:

This is a super fun way to let kids be creative, and since there’s no certain method of placing the fruit, other than just plopping it down, everybody’s a winner!  Start with sugar cookie dough and small bowls of your choice of fruits: 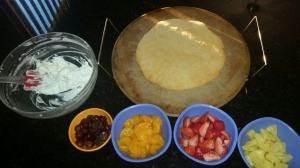 Ice the baked “cookie” with a combo of cream cheese, whipped topping and confectioners sugar: 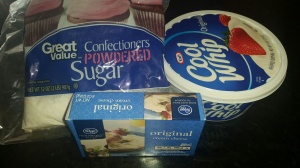 Gab and Gen in their creative mode!

And then turn it over to the kids! This was super delicious, and healthy because we can just gobble up the leftover fruit!  Be sure to check out the Cooking with Kids section, and if you have a good recipe that works great with kids, email me at conniekayeskitchen@gmail.com and YOU can be my next guest!  Until then —-

Bake sugar cookie and let cool.  Beat together cream cheese, whipped topping and confectioners sugar; ice cookie.  Throw (or arrange neatly) fruit on and have at it!

Meet Sherri – this is us hangin a few years ago on New Year’s Eve:

Sherri hails from Illinois, and I met her a few years ago at the lake.  It was a “memorable” night for all, and we had a great time!  Soon after that the hub and I stayed at their condo (why stop going to the lake in the winter if you don’t have to??) and the next morning she treated us to a few delicious breakfast items, which have become some of our favorites.   I was looking for a breakfast dish to make for a staff meeting this week, and remembered Walnut (or Pecan) Pear Coffee Cake.  Meet Sherri’s delicious concoction:

I will admit it does take a little time to prep, but it’s oh so worth it.  My team is going to be gobbling this up this week, and I’m pretty sure it will go over well.  Thanks for stopping by, meeting Sherri, and I hope you have the chance to make and share this with friends and family!

Toss pears with the lemon juice; set aside.  In small mixing bowl, cream the butter & sugar.  Add eggs, one at a time, beating well after each addition.  Beat in vanilla.  Combine the flour, baking powder, baking soda & salt; add to creamed mixture alternately with sour cream.

I first ate this delicious chicken after a long day on the lake…..Stacey had it simmering low and slow on the dock and it was oh so good once we returned from swimming in the cove.  Don’t let the pepperoncinis scare you away….use the chopped ones, and they aren’t spicy at all. With the italian salad dressing mix and the seasoning, it all comes out delish.  As with my bbq pork steak recipe, you can eat solo or throw on some buns, and it will be a crowd pleaser.  And it’s very economical (cheap)!

This pic shows some peppers, but typically they shred even more while cooking, they aren’t hot, and this is a delicious meal to come home to. We love it on individual cocktail rolls.  Thanks for taking a break and hangin with me!

Combine all ingredients in slow cooker.  Cook low and slow for 6-8 hours, depending on amount of chicken.  Shred for sandwiches.

Chocolate, marshmallows, more chocolate….how does it get better than that????   My wonderful little neighbor/friend Gabby made this for us recently, and I had to share here.  It’s super easy and delish, and everyone gets their own little portion.  (I love my own individual portion, and I think you’ll agree).

Start with instant chocolate pudding, and let it set up in the fridge.  Before you assemble these little devils, let it sit out for a  bit so as to come to room temp.  Couple spoonfuls in your graham cracker crust, marshmallows on top with a little hunk of chocolate bar, broil briefly and YUMMMMY.  Gabby’s recipe will be a hit for all. 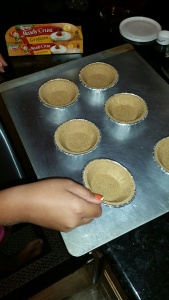 BTW – I love love the Gabster or I wouldn’t put her on here with a KU t-shirt….seriously?  I know what she’s getting for Christmas.  A little K-State purple!!!!  Anyway, here’s the final product.  Oh yeah, and put them on a couple racks below the broiler as things happen really really fast.  A.K.A. they burn quick! 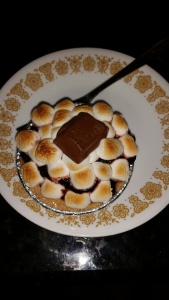 Gabby used the little individual chocolate candy bars on these, but we both agreed that a thin Hershey’s chocolate bar might work best.  Hope you enjoy as much as we did, and appreciate you stopping by to visit Gab and I!  If you make these and have tips and tricks, please take a moment to comment below.  Gotta jump off here to talk to my daughter – she’s entered in a rodeo in Missouri tonight, and I’m hoping she kicked some bootie in the roping and barrel race!

Make pudding as directed on package and chill.  Prior to assembling, let pudding come to room temperature.  Fill crusts with pudding, top with marshmallows and piece of chocolate bar.  Broil on lower rack to melt chocolate and lightly brown marshmallows.